Banco Finantia was considered the strongest financial soundness and cost-to-income among the top 7 banks operating in Portugal, according to the 2018 Ranking "Top 250 US Banks" prepared by the prestigious British magazine The Banker.


The study/ranking carried out by The Banker was based on objective criteria, and several indicators were used: Dimension, Financial Strength and Profitability. It was prepared with data on 31 December 2017.

According to the same study, Banco Finantia ranks fifth in financial strength among the 250 largest European banks and sixth in terms of efficiency, ranking 180th in terms of size.

Founded in 1926, The Financial Group's The Banker is the largest publication in the financial industry, with a broad distribution to more than 180 countries, with 60% of its readers being CEOs and CFOs of their respective organizations. 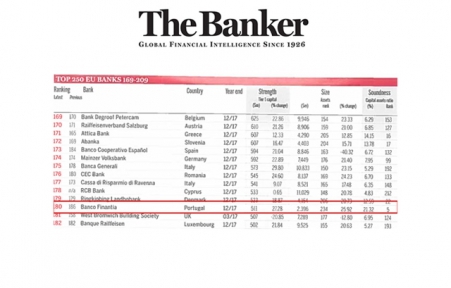